This post has unrightfully been put on my back burner, for some reason never drawing on my inspiration even though Inhotim was actually one of my top highlights for my entire year abroad.

But, here we are, when inspiration has struck and Belo Horizonte memories linger in my mind.

This trip, taken with my study abroad program CIEE, was not planned in any way by me so most of my usual points and helpful tips are not applicable here. Mainly I’ll just tell you what we did and how I liked it, okay? 🙂 Great.

First off, you may think, “What the heck does Belo Horizonte and Inhotim even mean?” Well, in Brazil there are different states just like the US. Minas Gerais is the state just inland of Rio de Janeiro and is renowned for their cheese, gold mining, and homey hospitality. Belo Horizonte is the capital of Minas and Inhotim is an incredible art museum within the city. So, now that we know where we are in the world, let’s dive in.

Flying into Belo Horizonte on a Thursday night, I immediately remember liking the airport. It was very spacious and well designed and I felt made a great first impression of both the city and Minas. After we had landed, it was a bit of a drive to our hotel, one which I took the opportunity to listen. I say this because at the time, I had yet to meet everyone in my semester group and felt as though Ian and I were the new kids trying to fit in, even though we had already been in Rio six months prior to them. It was a bit strange at first, but taking time to listen was helpful for me to see what sort of group this was. Of course we ended up molding quickly (it’s impossible not to when you’re abroad) and left the trip with great new friends.

Once we arrived at the hotel, we got our room assignments and unpacked a bit before all breaking off into dinner groups. I found myself in quite a hipster bar, with sangria and mini pizzas. Hipster places quite frankly are few and far between in Brazil. Only very small pockets of Rio have them, some in Sao Paulo, but I honestly would have never anticipated falling across one in Minas. I was quite pleased with the night, even though Mr. Practicality (Ian) wasn’t thrilled with the price points. After we were done eating, we noticed there was a Baixo Gavea-like street party going on, so we all bought a beer and hopped in. The street we were on was right on the river, and we had a beautiful view of the downtown skyline. It was a wonderful welcome to the city, and I went to bed confident that this was going to be a good trip.

The next morning our group got up, ate a great hotel breakfast and had a day-long tour around Belo Horizante. We saw the famous Oscar Niemeyer church, Igreja de Sao Francisco de Assis, located on a beautiful lake in a park. The longer I spent in Brazil, the more I grew to appreciate Oscar Niemeyer’s work. Similar to Gaudi in Barcelona, his work played on the imagination, using beautifully curved structures to tell a fairy-tale story. It really is quite inspiring. Afterwards, our group spent some time downtown, went to the Minerals museum, climbed to a lookout of the city, and of course ate some great Minero food. We ended the day by going to a great covered market full of everything from honey, to keychains, to parrots. I took some awesome pictures to capture the vivid color and texture of everything there. We sampled everything we could and then went back to the hotel for a quick nap before dinner.

Now, I personally don’t have any dietary restrictions. I eat everything and have no problems digesting things like gluten and dairy. For those that do though, traveling can be tough. When it comes to Brazil, Rio and Sao Paulo have some vegetarian options, but you need to know where to look. Most restaurants though, offer fried meat, beans and rice, and very limited amounts of fresh vegetables. That night for dinner we went to one of these standard places and one of our girls happened to be vegetarian. She chose vegetable soup from the menu because she got stuck eating rice and beans so much, she wanted a little variety. But, when the soup came, it had chunks of chicken in it and was made of a chicken broth. She asked the waitstaff to bring a veggie soup, and they went back, fished out most of the chunks of chicken, and brought her back the same bowl of soup. At this point, she was so hungry and frustrated that she couldn’t get what she needed, she teared up and had to excuse herself. Now I get it, food is emotional. I mean now that I’m graduated and back in the States, I work for a food company. Food is incredibly personal, and to not be accommodated properly is so frustrating.  But I feel that there was a lack of planning and flexibility on her part.

When you travel, you need to be prepared. Bring snacks! Go grocery shopping! Chose a restaurant where you know you’ll be able to have more than one option. The other half of our group went to an Indian restaurant that night, which of course is all vegetarian, and she hadn’t eaten much at all that day. Especially in a place like Brazil, bringing food places really isn’t that big of a deal, and most often there are snack options on every corner. I don’t mean to harp, and I never want to discourage others from becoming vegetarian or vegan, all I’m saying is that if you have restrictions you need to think ahead.

The next day was entirely designated to the Inhotim art museum, which was really incredible. The museum is all modern art, plopped in and around this giant botanical park. The entire thing is about five or six acres and has had some world-renowned artists contribute works to it. The day was sunny and my senses were so stimulated all day by sights, sounds, smells, action, and even taste (the food there is to die for). Inhotim, as mentioned before, actually made my top-ten list of things I did while in Brazil (I’ll be making a complete list later). In my mind, Inhotim is as important to visit as Iguazu Falls. The ticket entry is a bit expensive, but it’s worth it and there are buses that go from Belo’s center out to the park entry (which is about an hour away). The bathrooms are the cleanest I’ve seen in Brazil and that have awesome gift shops and restaurants along the way. It really was the full package experience. When going here, wear great walking shoes and bring water, as you are walking pretty far between each exhibit.

Our final day in Belo was a Saturday, where our group (and the entire city it seems) went to a Carnival/ market/food fair/ art show. The gathering really took up a square mile and was awesome shopping, people watching, and snacking. Again, the weather was beautiful so it made the outing very enjoyable and an excellent thing to end our time with. I went here as my time in Brazil was winding down, so I made sure to pick up a few things I wanted as a momento, but tried not to go crazy. Since Minas is known for stones, I bought a beautiful pendant that I have now put on a chain and wear with joy 🙂 After we all explored everything, we gathered up and headed back to the airport to make our way back to Rio!

Take a quick peak at some photos I snapped at Inhotim and I hope everyone has an excellent week! 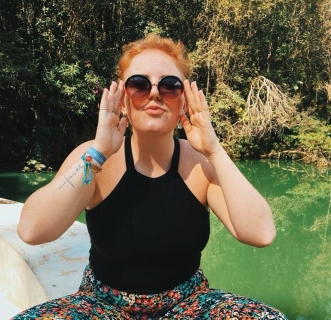 Just a coffee-drinking plant nerd out here trying to see the world and tell you about it. View all posts by Monica Brown

My name is Monica and I’m a coffee-drinking, plant nerd who loves to travel. Recently returned from Rio de Janeiro, Brazil, I’m here to give you insider tips and insight into what I’ve learned about both living and traveling abroad.

New on the Blog